Many SaaS companies are missing out on 33% more revenue because of their pricing.

If that statistic stops you in your tracks, you’ll want to read this interview with Price Intelligently’s CEO and Founder, Patrick Campbell (and then get to work on your pricing strategy!) 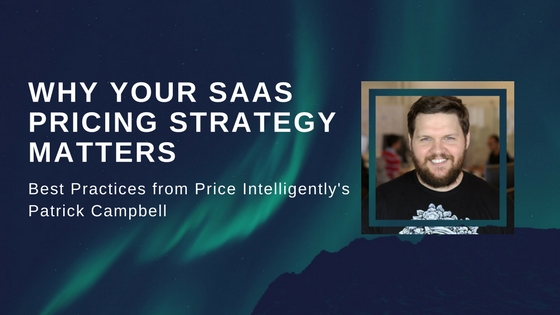 Can you tell me a little bit about the Price Intelligently origin story? What does your background look like and how did you get started?

I’m from Wisconsin (we jokingly call it South Canada!) and grew up in a smaller town that was mostly peppered with farmland but has now been swallowed up by Milwaukee and labeled as a suburb. I went to school in Illinois on a debate scholarship and then worked in DC in the intelligence community as well as with Google doing eCon modelling (taking data, applying algorithms and looking for something interesting in it.)

What’s interesting about Google in particular is that I worked on a few projects and made Google a fair amount of money. I did this work on my own – nights and weekends – and taught myself the basics of code. I also pulled from my experience in the intel community to ensure that I could provide some automation and optimization of my job. The problem is, if you bust your ass at Google, it’s not always going to get you where you think it will so I thought, “If I am going to bust my ass at Google, why not do it on my own and profit from it?”

Thankfully, I had the foresight to know that I didn’t know everything so I made the move to work at a smaller startup to learn the ropes.

My first gig had a lot of technology and data tied to it so I worked as a special projects guy (project manager, data scientist, etc.) and one of the main areas I focused on was pricing. I did a lot of work around solving pricing problems. I would do small tests and see big craters or big gains in pricing, which made me realize just how important pricing really was. However, the company didn’t want to invest a ton of time and resources into this area of the business, which led me to believe that they knew it was important but didn’t want to spend a lot of cash on it. It was here that I realized that nobody knows what they are doing with pricing but data and algorithm can help lead the way.

One thing I realized when I left Google was that I could always get another job. Whether that meant working at a coffee shop, working with another startup or going back to Google. I had six months of personal runway in the bank so I dove into the company as a co-founder but I was essentially a solo founder for all intents and purposes. My other two founders were well-versed in the tech space as one was the head of product at HubSpot and another was a CTO at another company. They acted as advisors but I worked alone for nine months in a room before my first real hire. It worked out!

What problem does Price Intelligently solve?

When you look at a business – doesn’t matter what kind of business – if you’re scaling something in some manner, everything you do is centered around your pricing. Your price is the exchange rate on the value that you’ve created. It could be an e-book, a widget, a cure for AIDS, etc. – whatever it is, you’re putting that out there as the value of the thing you’re doing. Everything you do in a software company is driving people to a point of conversion or justifying the price of what you’re offering.

It really boils down to this: you’re offering a product and now you need to explain the value to the person who is sitting on the pricing page.

When you think about pricing like this – as an exchange – you can begin to measure the value, which is what we do. We collect data from your potential / existing customers and run the data through our algorithms and that gives us data on how much they think it’s worth, what features they value and who the preferred audience is. It’s constantly evolving but in a nutshell, we quantify buyers and with that data give you data-driven pricing.

We spend, on average, in the entire history of a business less than 13 hours on a pricing strategy. In contrast, we spend 15 hours per year picking out custodial supplies for a business. We have data and information that says that pricing is the thing that has the highest pull on your bottom-line. No other decision is more important.

The results we see with customers using Price Intelligently is 30% top-line growth. We provide our customers the confidence needed to make the decision to charge what they are worth. And, what you focus on grows.

Continual price optimization is key for long-term growth – focusing on acquisition levers, etc. You should really be changing your pricing every six-nine months in some capacity. That may not mean raising pricing every month but rather optimizing it in some way each month.

Price Intelligently helps companies figure out their pricing strategy based on research from their existing and potential companies. It’s a game of inches – you need to be willing to tweak, optimize, test and continuously focus in on your pricing strategy.

We also recently launched ProfitWell. We give it away for free and we place add-ons on top of it, including Price Intelligently, and we were able to save eighteen months of dev time because we knew what to build versus stumbling around in the dark. Based on the data collected, we then created a program that people actually wanted: ProfitWell. ProfitWell offers free SaaS financial metrics that plug into billing systems (Stripe, etc.)

You share A LOT of great information over on the PI blog. What are some of the key mistakes that you see SaaS companies make with their pricing strategies?

There are many mistakes that companies make but I’ll focus on the primary mistakes:

A value metric aligns you right to the customer. If you identify the customer in your program as using your program more and more, there is the ability to prove the value that the company is bringing.