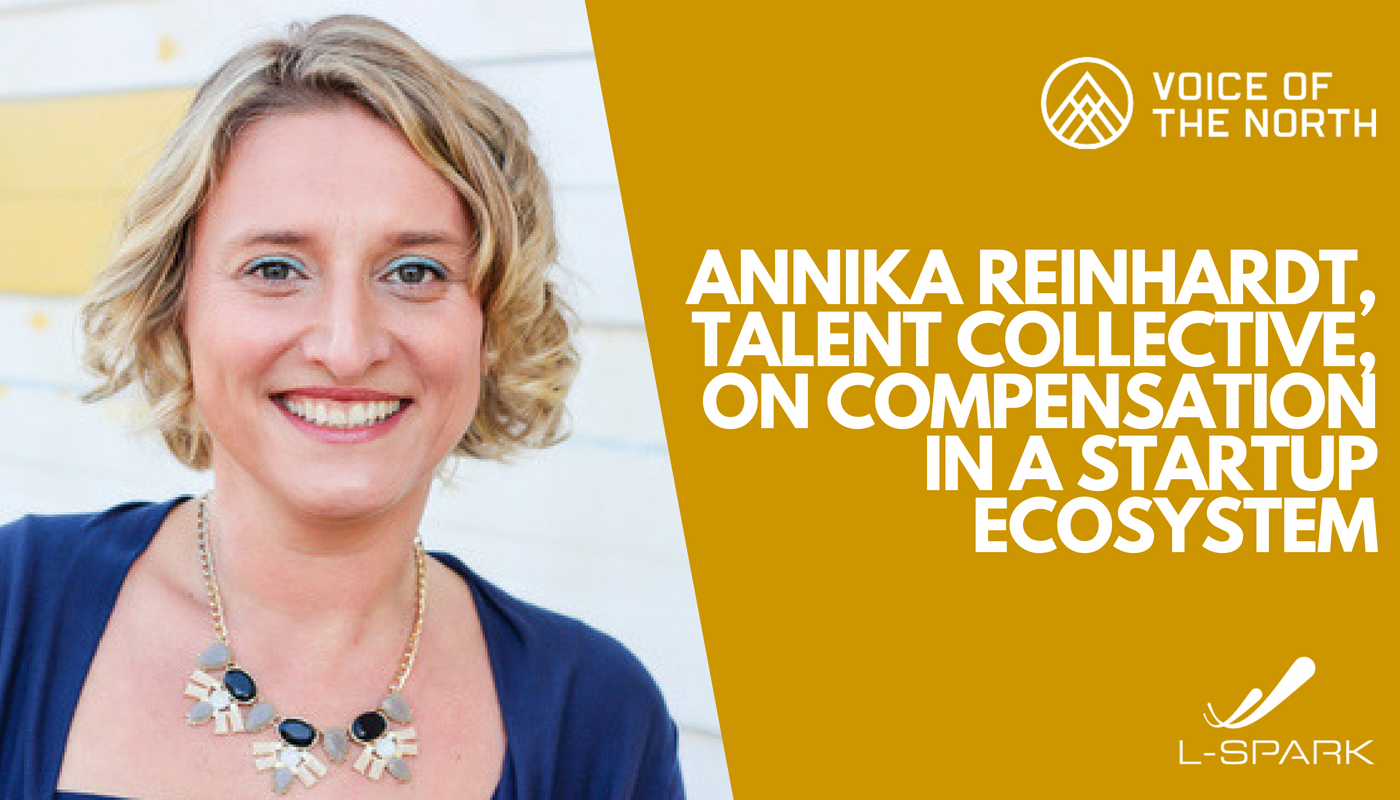 As the co-founder of Talent Collective, an organization focused on helping tech companies develop, grow and reward their talent, Annika Reinhardt creates compensation strategies that are values aligned and don’t break the bank. Annika is a Certified Compensation Professional with a Masters Degree in Project Management and over 10+ years of business experience. She has worked on strategic compensation plans with growing startups across Canada helping them scale quickly while attracting and retaining top talent.

Annika will be speaking at this year’s SAAS NORTH and we couldn’t be more thrilled to share with you this conversation we had on talent, negotiation, compensation and more.

L-SPARK: Tell us about Talent Collective

ANNIKA: Crystal Henrickson, my co-founder, and I have known each other for a long time. We are both foodies and we ran a big event in Vancouver that became fairly well-known. A few years ago, I approached Crystal to chat about what we could do so we talked about what the State of the Union was. Crystal found herself giving a lot of career advice for folks wanting to work in tech and I felt that what candidates, especially women, really needed was more support around negotiation.

Crystal is a Certified Leadership & Career Coach and has worked with dozens of tech companies including Yelp, Breather, Invoke and others. Her passion for supporting individuals on their career journey and my drive to set them up for success in their salary negotiations, helped us launch the business and become successful pretty quickly.

Often, folks looking for jobs are on their own whereas companies have a team of HR professionals. We figured that WE could become their teams to ensure that jobseekers got the jobs they wanted and were paid fairly. As we began working with these individuals, we saw young tech companies struggling to keep the awesome talent that they were getting through the door. We saw that there was a gap so we began building the bridge between the startups and the talent to ensure that they were both satisfied.

We still do a lot of individual career coaching but we’re a lot more focused on startups – mostly early stage companies – around the growth of the company.

L-SPARK: What are some of the challenges you see around negotiation and compensation?

ANNIKA: I’d love to break this down into the challenges for both the individual and the startup.

Individuals: the biggest challenge is that, unfortunately, most people don’t negotiate. Glassdoor put out a survey awhile back that stated that less than 50% of jobseekers negotiated anything and a small portion of them have asked for anything extra.

Women have a tendency not to negotiate or if they do, they are less likely to get something.

A new study just showed that the problem is often the bias internally that more and more folks are asking but people of colour and women are getting heard less often. Hence, even more important that we work with companies to increase pay equity and pay transparency.

People don’t always know where to get market data from. We live in a time where data is incredibly accessible for everyone – more than ever before – around salary data. It’s really about guiding people to the data so they can observe the opportunities and see what’s out there. People often jump in rather than do the prep work.

I often get asked what the best way to approach negotiating is – negotiations are just conversations at the heart of it so we really try to reframe things for folks. It’s a conversation between people who mutually want the same outcome.

Startups: the biggest challenge for smaller organizations is that compensation is often an afterthought. It’s often a “look around the market to see what’s happening” and then matching what you see. It’s not often seen as a tool to leverage for better talent. It should be looked at as a strategic way to scale and move your organization forward. Compensation is not just the money – perks, benefits, equity, salary, etc. – is all talent appreciation.

If you want great talent, it’s more than just a number. You need to figure out how to scale appropriately – you don’t want people not receiving market value, especially if you want to retain your talent. If it can’t be compensation, I’d recommend asking yourself, “How else could you set yourself apart and properly communicate that to your applicants?”

I’m a huge advocate for pay transparency – what can we do to help employees coming through the door better understand how much we value them? How can we talk about the relationship and the value? We help companies understand what that is and how it can help set them apart from other tech startups and sometimes, it can be a simple step such as posting a salary expectation in a job posting.

L-SPARK: Do you see a difference in how women approach compensation vs. their male counterparts and if so, what do you think we could be doing differently?

ANNIKA: I think, especially for individuals, you need to share with one another and pay transparency needs to be something we leverage often.

We need to start having conversations around pay with each other – whether it’s a friend or a colleague – to get an idea of where people are at and what they are getting paid. For example, you could ask a friend, “I’ve been thinking a lot about the topic of compensation and I’m wondering if this is something you want to contribute to?” Or, on the startup side you could ask, “What do we value in our companies and what’s important to us?”

I’m part of a group on Facebook called Girl Gang and we started creating an open salary spreadsheet. Most of the info is anonymous around companies, etc. but the info helps people to determine whether or not they are being fairly compensated in their industry or role.

There’s also a Slack channel – Ladies Get Paid – that hosts great conversations where everyone can contribute and chime in. They can ask questions about reviews, compensation packages, raises, etc. This is an opportunity to empower each other and say, “You can do this!”

On the company side, we need to be more open around pay and eliminate the need to negotiate at all! Telling candidates: this is our range, here’s where we get our range from to ensure it’s on par with the market and then saying, “Here’s where we think you fit in and why.” Then you’re not sharing everyone’s salary in your company but instead giving them the info they need to succeed.

Share with employees how you value them and what you do to share that value. Whether it’s perks or benefits or career development, share it. At the end of the day, we all want to belong so if we have the info we need to make that decision, we’ll be much happier.

L-SPARK: We saw a blog post on Talent Collective about the non-linear career path, which we loved – it describes many of our own paths perfectly. Why is this becoming the norm now?

ANNIKA: Career cycles look different these days. The idea that you might move into a new role or company within 2-3 years is quite normal. We see this quite a bit in terms of the people we’re working with – they get to a certain part in their life where they want to pivot.

We’re in an employee market right now. It’s hot. Unemployment rates have never been lower, especially around tech, and everyone is talking about the war for talent, which gives people more choice. People also have the opportunity to ask themselves, “Is this my meaning, purpose and where I need to be?”

There are also different values for different generations. Today’s generation are willing to take more risk, change often and it seems ingrained in them that with a couple of years’ experience, they can begin to stretch out and try new things. Career transitions have never been easier or faster.

The gig economy has also sped things up and made career changes much more accessible. It’s never been easier to be a freelancer and do your own thing. 40% of the North American population will be freelance by 2025… that’s just around the corner! Companies are much more willing to hire freelancer, which gives people more choice.

L-SPARK: Can you tell me a bit about your talk at SAAS NORTH? What can attendees expect?

ANNIKA: I’ll be on a panel on the topic of building successful SaaS financial operations. I’ll be will be bringing the compensation piece to that conversation because talent takes up a huge part of your budget. Often, people don’t make the connection as to how to leverage compensation to get better talent and be more strategic. Having a compensation strategy is a strategic move.

In most organizations, almost 80% of those asked feel that their staff or managers are not properly equipped to have the right salary conversations with their team. If you put the value early on around compensation, it’ll give you a strong competitive advantage compared to others.

It’s expensive to hire talent so we want to make sure we get the best people and keep them.